Details About this Section Below - SCI-FI JASPER 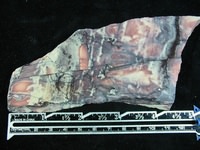 [An example of the Sci-Fi Jasper Rough]

THIS PIECE HAS SOLD, but it is here as an example of this neat material. Known as Sci-Fi Jasper, it is a porcelain jasper from Mexico. It has also been called Exotica. We have seen this material range from absolutely amazing purple, pink and light tan patterns, to blends of those colors, as well as some with darker purples and burgundies. Below are some we have in stock now. 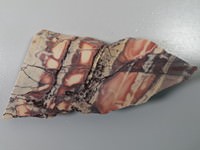 This is a small slice of Sci-Fi Jasper, packed full of pattern. It is about 3" x 1 3/4" at the widest points, room for a couple nice cabs or more, depending on desired size. It's around 7 mm thick and the weight is 52 grams, or 1.8 ounces. 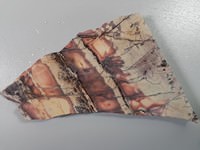 This piece of Sci-fi Jasper has a different look to it than what we have been used to. But it was part of the same batch of rough as we have had in the past. The one edge has deep burgundy, almost looks like it was brushed with a paint brush. And on the other side (2nd photo) you can see a 'drip' of red in that area. At those widest tips it measures 4" x 2 1/2" and 6.5-6.9 mm thick. It weighs 68 grams, or 2.4 ounces.

Very neat patterns on this little slice of Sci-Fi Jasper - perhaps why it is also known as 'Exotica'(?). It measures 3 5/8" x 2 1/2" x 7 mm thick, and weighs 77 grams, or 2.7 ounces. Nice for cabbing, or for display, whether polished or even natural and unpolished as it is. 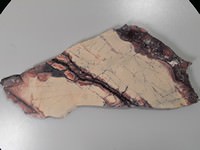 Details About this Section Below - Arizona Sunset Jasper 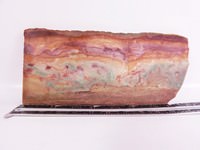 THIS PIECE HAS ALREADY SOLD, but it represents some of the best of this rare material we acquired from an old collection around 2017. We had never seen material like this before. A fellow rockhound recognized it as 'Arizona Sunset,' also known as 'Gunnery Point Jasper.' We found some data online that it was collected sometime around the 60's but is no longer available for collecting. It was from an old bombing range in Arizona called Gunnery Point, and was reportedly also marketed around that time under that name of Arizona Sunset Jasper.

But as I put up some slabs now in 2022, I have found a few sources of info, like the first two photos here on World of Jaspers, by Hans Gamma, that show a different stone from Burro Creek named 'Sunset Jasper,' and one similar to this piece coming from Alamo Crossing, Mojave County. (I'm guessing the first is not the same as this one which I previously found referred to as Arizona Sunset Jasper' from Gunnery Point.) And there are several types, similar to what we have below, that have been referred to Gunnery Point, or Gunnery Peak. As we did not collect this material ourselves, we are just passing on what we have found online. 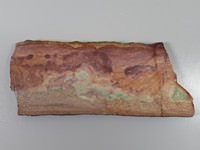 This is a another piece of Arizona Sunset Jasper. If you love to spot landscapes and other 'scenes' in Jaspers, you should be able to find a number of them in this beauty - a very neat, rare material! It is 4 1/2" x 2 1/8" x around 6.5 mm. It weighs 103 grams, or 3.6 ounces. It has a fracture on the one side as visible in the photos, room for a small cab. But be aware of that if you want the whole piece for display. (First Class shipping for less if desired, ask for an invoice.) 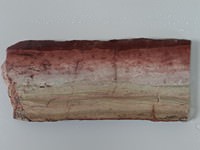 This is an unpolished slab of Arizona Sunset Jasper. It measures about 4" x 1 7/8" x 7mm, and weighs 87 grams, or 3 ounces. First Class postage available for less on request. (Click here to read more about the material.) 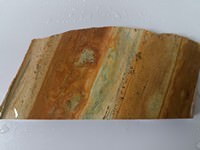 This is a small slice of Arizona Sunset Jasper. It's a pretty piece, a picture jasper with 'scenic' views if you can vision them. Very neat slab whether polish it or leave it unpolished as it is. It is 3 1/4" x 1 3/4" x 6.7-7.3 mm thick. Weight is 57 grams, or 2 ounces. Ask for an invoice if you prefer First Class shipping for less. (Click here to read more about the material.) 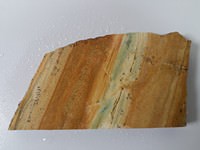 This is another small piece of a 'scenic' Arizona Sunset Jasper from Gunnery Point. It is roughly 3" x 1 7/8" x around 9 mm thick. It weighs 73 grams, or 2.6 ounces. (First Class shipping for less if desired, ask for an invoice.) (Click here to read more about the material.)

Arizona Sunset Slab from Gunnery Point with Pinks and Green 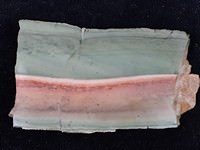 This is a another piece of what we believe to be Arizona Sunset Jasper. This piece has more flowing greens and pinks in it. It is about 3 1/2" x 2 1/4" x 6-6.5 mm and weighs 80 grams, or 2.3 ounces. (First Class shipping for less if desired, ask for an invoice.) (Click here to read more about the material.)

Information About this Section Below - Paisley Jasper 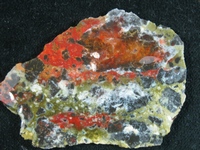 THIS PIECE HAS ALREADY SOLD, but we do have more, listed below. We found this small batch of rough in Quartzsite one year. The person we bought it from called it Paisley Jasper, and said he collected it himself some years before from Northern Nevada. We thought it was very neat looking material so we bought the batch and offer slices of it below. 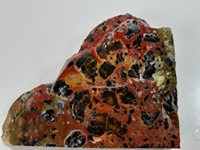 This is a slice of colorful jasper, from Northern Nevada. For details about this material, read above here. The person who collected named it Paisley Jasper. It weighs 39 grams, or 1.4 ounces, and measures apx 2 3/8" x 2" x 6.7 to 7.4 mm thick. You can see a fracture line in slide show photos #2, 5 and 6 (barely visible slightly above the center) but I can't see it on the other side; it may or may not be an issue if thought is to cut a large cab. (First Class shipping available on request for less cost.) 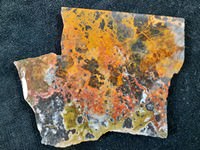 This is another slice of Paisley Jasper from Northern Nevada. The greenish area feels softer than the rest of the stone but plenty of room for some awesome cabs. It weighs 90 grams, or 3.2 ounces, and measures 2 3/4" to 3 1/4" the longest way by 1 3/4" to 2 3/4" the other direction and 6.6 to 6.9 mm thick. (First Class shipping for less is available upon request.) 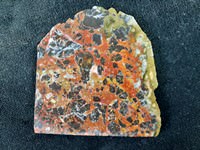 This slice of Paisley Jasper not only has an exotic look to it, but it is really colorful with the red tones in it. The person who mined this material named it Paisley Jasper, and it was collected from Northern Nevada. It measures a little over 2 1/2" x 2 1/2" on one flat side, and as wide as 2 3/4 x 2 3/4 on the other. It weighs 70 grams, or 2.5 ounces. Very neat slice. (First Class shipping for less is available upon request.) 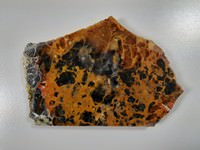 This is another slice of Paisley Jasper, from Northern Nevada. Wild exotic-looking patterns in this one, with reddish-orange and black tints. This slice weighs 72 grams, or 2.5 ounces, and measures about 3 1/2" x 2 1/2" at those widest tips (3x2 at narrowest) and 6.5 mm thick. First Class shipping for less is available upon request. 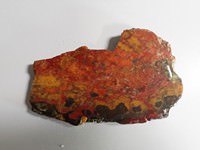 This slice of Paisly Jasper has a less-exotic look as is visible in many of the other slices, but still colorful. It shows some possible fracture lines, but overall there is still room for a number of nice cabs. It measures 4 1/4" x 2 to 2 1/2" and about 7.4 mm thick. The weight is 107 grams, or 3.8 ounces. First Class shipping for less is available upon request.

DETAIS ABOUT THIS SECTION BELOW - STONY CREEK JASPER 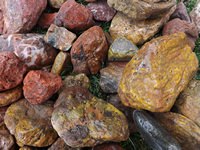 This is Stony Creek Jasper, collected from Northern California. We did not collect it ourselves, but we got most of it from the person who did. The material we've seen from this area is quite varied in color, but most of what we have are somewhat multi-colored, some more yellows, and some reds, with a few here and there that have greens or other unique mixes. Quite a bit of the rough material looks fractured, but still some really neat pieces that could yield a number of nice cabs or display slices. 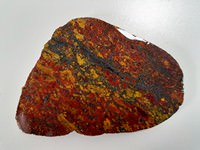 This is a Stony Creek Jasper slab. The material comes from the Stony Creek in Northern California. It has some tiny pockets along the charcoal-looking area (might be hematite, has a red streak). It is apx 2" x 3" x 7-7.4mm and weighs 68 grams, or 2.4 ounces. (First Class shipping available on request for less cost.) 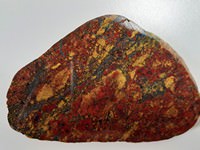 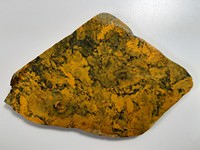 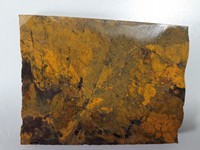 This is another yellow and black Jasper slab from Stony Creek. It measures about 2 1/2" x 2" x 7.4 mm and weighs 69 grams, or 2.4 ounces. (First Class shipping available on request for less cost.) 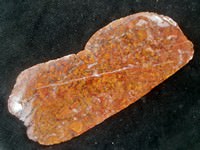 This is another slice off a stone collected from Stony Creek in Northern California, but this one has reds and oranges in it. Several of the white lines you see in it look like Quartz-filled healed fractures. But a couple of them feel like they aren't healed. Still plenty of room for some gorgeous cabs or as a specimen piece. It is about 6" x 2 1/4 to 2 1/2" x 6.8-7.5 mm. It weighs 164 grams, or 5.8 ounces. It is hard to capture the actual coloring of this material - in natural lighting, it is not as bright or as intense as it looks in the photos. But move it into light and it's gorgeous.

Reds and Mustard-Yellows Jasper Rough, By the Pound ($5/lb)

These are pieces of Jasper mostly from the Lavic Siding area of the Mojave Desert, though it is possible a few pieces may not have come from there. This material is wonderful for cutting and polishing, and sometimes there are fabulous pieces with the colors mixed, as in the photo #6. These are mostly smaller sizes, on average - 1" to 3 1/2" and 1/2" to 1 1/2" thick, but could be a few a little larger or smaller. Great for tumbling or cabbing. We have about 10 lbs available at this time. (If you want larger sizes, we have some - please contact us with the size of your saw blade and how many pounds you might be interested in before ordering so we can pull a batch first. Quantity is limited.) 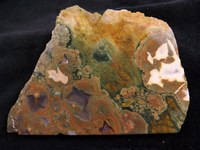 This is a slice of Rain Forest Jasper. It's already been sold, but we do have some more material. If you would like to see some, contact us and we will make it a higher priority to get more listed. 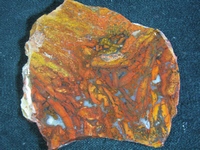 [Another example of Jasper/Agate from the Lavic Siding Area]

This is a brecciated Jasper from the Lavic Siding area of the Mojave Desert in Southern California. We have plenty more to photograph and put up. We also have some rough. Email us and we will get more up soon. 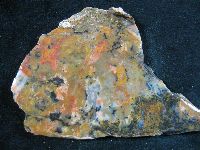 This is Rainbow Ledge Jasper-Agate from the Randsburg/Inyokern area of the El Paso Mountains (Mojave Desert of California). The material is often referred to as Rainbow Ridge Jasp-Agate. Our understanding is the rock club that has the claim on this material says it is actually Rainbow Ledge, but it is even written Rainbow Ridge in some of the gem trail books. Either way, some awesome material has come from this area. We have a variety of other pieces and even a little rough. Email us and we will get more up soon.

Back to the Home Page
Top of This Page, PREVIOUS, NEXT
Slab Index
Gallery of Awesome Rocks


If you didn't find what you were looking for here, please check our eBay Store and search, or select the Slabs category to find similar items. You can also contact us to find out if we have what you are looking for, but have not listed it yet.